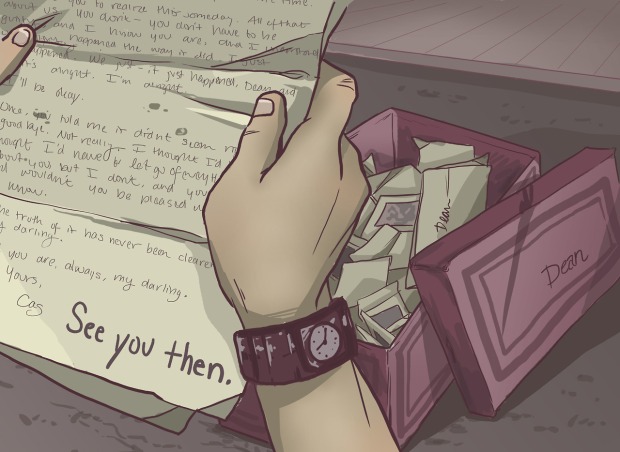 Dean Winchester’s tagline in “Wendigo” (1×02) is one of the most iconic and memorable lines from the CW’s Supernatural. It sets up the series for a wild ride of horror, heartbreak, and eventually, heavenly interference.

Speaking of heavenly interference, Castiel’s revelation to Dean in “Lazarus Rising” (4×01) — “I’m the one who gripped you tight and raised you from perdition” — is also a series highlight. In that episode, when asked who he is, Castiel responds bluntly and concisely, and from there we watch as Cas goes from enemy, to hesitant ally, to good friend, and finally becomes like family to the Winchesters.

The idea of Dean and Cas being together romantically has been extensively debated in the Supernatural fandom over the years. Some people see them the way the show presents them: best friends, definitely more on the family side, but friends nonetheless. Then, there are those who think Destiel — “De” for Dean and “stiel” for Castiel — will eventually become canon. (You’ve probably seen the #WeDeserveDestiel tag floating around on Twitter.)

The second group of people — the Destiel shippers — are the same ones who write fanfiction, create fan art, come up with theories, or just generally share the love for their ship. Two of those people, gabriel and standbyme, became hugely popular when they published their epic fanfiction, Twist and Shout.

Twist and Shout is a Destiel slashfic set during the Vietnam War. It has a length of 98K words, 4.8K comments, and a whopping 963K hits. The plot summary from Archive Of Our Own reads as follows:

What begins as a transforming love between Dean Winchester and Castiel Novak in the summer of 1965 quickly derails into something far more tumultuous when Dean is drafted in the Vietnam War. Though the two both voice their relationship is one where saying goodbye is never a real truth, their story becomes fraught with the tragedy of circumstance. In an era where homosexuality was especially vulnerable, Twist and Shout is the story of the love transcending time, returning over and over in its many forms, as faithful as the sea.

According to the Fanlore.com, “Twist and Shout has become on the most famous works of fanfiction in the Destiel fandom, with tons of fanart, fan-videos, and comments expressing emotional distress caused by this fanfiction spanning sites from Tumblr to YouTube, and even to Goodreads. It has created its own underground following, and most people in the Destiel fandom recognize its name even if they themselves have not read it.”

Even if they themselves have not read it.

Interesting bit to include, considering the protective nature of the story’s fanbase.

For the sake of example, let’s say you’re an invested fan of Destiel and, while browsing Tumblr or AO3, you come across this fanfic. The premise seems interesting to you, and you put it on your Marked for Later list, intending to go back to it another day. However, when curiosity gets the better of you and you look up the Twist and Shout tag on Tumblr, you become instantly overwhelmed by a tsunami of comments, rage posts, and many other bits that all seem to emphasize the same point:

“You aren’t a true Destiel fan if you don’t read Twist and Shout!”

I have to say, I disagree. The purpose of fandom is to have a reliable and creative outlet for fans of different types of media. Fanfiction takes the characters, situations, settings (etc.) and reimagines them in a whole new way. And not everyone shares the same interests:

Since we’re here, let’s talk about the emotional rollercoaster that people who do read Twist and Shout go through. If you follow the story’s tag on Tumblr, you would find blog recommendations, fan art, gif sets, and meta posts from people encouraging you not to read the story.

Yes, you read that right. Any number of Tumblr bloggers and Destiel shippers that read the story have come out of it emotionally changed, so much so that the mere mention of Elvis, Hell, or even Thursdays, is triggering. Many people come to fandom as an escape, whether it’s from a rough personal life or mental health issues (or sometimes both), so the idea that a fic can cause this kind of emotional backlash is astounding.

So, what does this mean?

It means you shouldn’t feel obligated to read (or not read) a fic because of what other people say about it. It’s just like watching a show or a movie and not liking it for one reason or another. Fanfiction shouldn’t be “required” by any stretch of the imagination, and anyone who says so is being unfair.

Have I read Twist and Shout? No, and I don’t plan to. (Trust me, I tried, it’s just not my cup of tea.) Does that make me a “bad” or “not true” fan? No way. I love Destiel just as much as anyone who has read the story, and trying to tell me how I feel about my ship is just wrong.

So, if you’re like me and have felt cornered into reading Twist and Shout because of some of the more passionate fans out there, don’t. Think about it this way: Dean, Sam, and Cas are Team Free Will – how would they feel if someone told them they had to do something?

Brianna is a 20-something grad student with an addiction to coffee and various fanfictions. She's been writing regularly since she was 13 and hasn't let the muggles get her down yet. She loves reading, watching Netflix and YouTube, and long walks on the beach.

2 Comments on Is There Such Thing as “Required Reading” for Shipping?