Not every story is what it seems.

When the teaser for season one of the CW’s Riverdale first appeared, audiences were intrigued and delighted by the cornucopia of progressiveness. The cast, while still predominantly white, suggested an attempt on the CW’s part to cast minorities — Ashleigh Murray (Josie) and her Pussycats are black women, Ross Butler (Reggie) is Asian-American, Camila Mendes (Veronica) is Latina. Furthermore, the teaser highlighted a fleeting kiss between Betty and Veronica, suggesting a potential subversion of the canonical Archie love triangle. However, this guise of progressiveness couldn’t last. In fact, after only a few episodes, Riverdale effectively abandoned the story elements that drew audiences in at the beginning. And, perhaps unsurprisingly, the storylines they abandoned (or woefully missed the mark on) all involve minority communities: LGBTQ, people of colour, mental illness, and women. 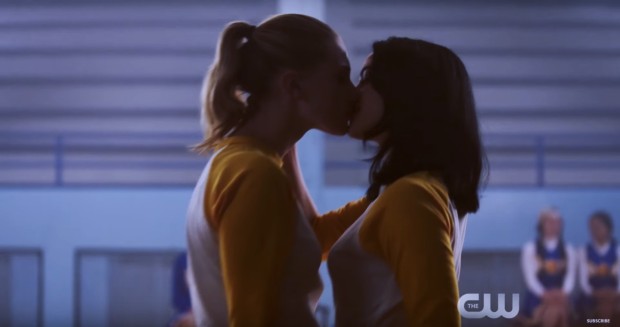 Even though “love triangle” dynamics have provided queer fodder throughout pop culture history (particularly between M/M ships), Riverdale starts off with blatant queerbaiting. Throughout the history of Archie Comics, there have been subtle nods and in-jokes to the fact that Betty and Veronica should dump Archie (the most basic boy ever) and just date each other. In Riverdale, the two kiss in the very first episode. It’s almost as though the writers wanted to nip any sort of sexual tension (queer subtext) between Betty and Veronica in the bud by, ironically enough, beginning the show with an overt “gay moment” between them. This moment was actually shown in a promotional video before the series debuted, teasing LGBTQ fans about the possibility of a long-awaited romance between Betty and Veronica. But even actress Lili Reinhart (Betty) shut down this queer narrative before the show even aired. In an interview with HollywoodLife, she used some poorly chosen words to describe the potential for “Beronica:”

There’s a group that very, very much wants it. It’s just, in our show, they’re not romantically involved. […] They’re soulmates in a ‘friends’ way. Our show is not meant to be fanfiction. We give them a taste of it when they kiss, but that’s all it is. People love Beronica and they want to see them together, but that’s just not our show.

It doesn’t take a genius to figure out what Lili Reinhart is actually saying here. To be clear, “the group” who wants Beronica is the LGTBQ fan community. And when she says the show “give[s] them a taste of it when they kiss,” she is referring to the overt queerbaiting that happens in episode one. Even though this moment catalyzed the Beronica ship and provided a gif-able “gay moment” that other ships wait seasons for (if they get it at all), there have been no further queer interactions between them. It’s almost as though we’ve tipped the scale in terms of queerbaiting — instead of agonizing season-long subtext, queer fans are ostensibly given what they so desperately crave right off the bat, only to have it immediately ripped away before a blink of an eye. Overt lip service (like an actual kiss) is still lip service.

Another background queer character is Kevin Keller, the first openly gay character in the Archie Comics Universe and to star in his own solo series in mainstream comics. Like with the Beronica kiss, it seemed for the first few episodes that Kevin would play a major role in the main Riverdale cast, with him being Betty’s BGF. However, Kevin quickly fades into the background — he is not a fully fleshed-out character, offering only occasional quips about men’s appearances (e.g. Reggie’s return). When he finally does get a boyfriend, we find out he is no more than a plot device, a straight man pretending to be sexually interested in Kevin to get information from the County Sheriff. Ugh.

Finally, Jughead Jones, who has been interpreted as aromantic in the original Archie Comics Universe and asexual in Zdarsky’s reboot, has been thrust into a heterosexual romance with girl-next-door Betty Cooper. While many Bughead shippers are thrilled with the pairing, many fans of aroace Jughead felt let down by Riverdale’s propping up of yet another heterosexual narrative. One can only imagine the fan outcry if Jughead had been traditionally portrayed as a ladies man, only to be written as asexual in a mainstream television show.

On the surface, it seemed like Riverdale was really striving to present itself as a diverse universe — there are multiple characters of colour including Reggie Mantle, Chuck Clayton, Dilton Doiley, Veronica and Hermione Lodge, and Josie, Val, and Mel of the famed Josie and the Pussycats.

However, based on group shots of the the main crew around the picnic table, it is painfully obvious that all the characters of colour (save for Veronica, who is very light-skinned) have been, once again, relegated to the background as supporting characters. Even Pop, who runs the town diner, is only seen in passing, and without a single word. Not to mention Reggie Mantle, a major character in the comics, has had less of an impact on this season than Dilton Doiley.

There is nowhere the show makes this separation more obvious than in the scenes with Josie and the Pussycats. How convenient it is that the black characters’ storyline involves separating themselves away from the rest of the cast in practice rooms and onstage? They rarely mix with the rest of the cast and, when they do, these storylines are short-lived and usually play out before the end of the episode (e.g. Veronica’s becoming a Pussycat; or Archie’s “relationship” with Val, where she effectively disappears because Archie is a f*ckboy).

Where Riverdale, on the surface, appears to have cast an ethnically diverse ensemble, the storylines ensure the white and light-skinned characters remain the focal points of the story.

The other problematic thing about Riverdale is its portrayal of mental illness, which seems to plague the entire Cooper family. Betty’s mother resembles, in some scenes, the evil stepmother or Stepford Wife stereotype — a woman on the verge of a psychotic episode who needs to remain steadfast control of her family and surroundings. We see seeds of darkness in Betty’s mother from the very beginning (I thought the narrative was setting us up for a Mrs-Cooper-is-the-killer reveal), but these seeds bloom when she throws a brick through the storefront of her husband’s publishing company. We see the first cracks beneath the Coopers’ veneers when Betty “goes dark” during the kidnapping of Chuck Clayton. She handcuffs him in the hot tub and, dressed as a dominatrix, seems to veer closer and closer to a dissociative state, almost drowning Chuck by pushing his head under the water.

More recently, the show has hinted at the possibility of a return of “Dark Betty,” when Chuck returns to Riverdale High. Betty is so angry at seeing him that she clenches her fists tight enough to self-harm — a close-up shot of bloody fingernail cuts in palms makes sure the audience knows she is unstable. The threat of mental illness is present in the Cooper women, which becomes even more troubling by the revelation that Betty’s father sent Polly away to a mental institution when he found out she was pregnant, an action that follows in the tradition of men condemning women as crazy and sending them off for “treatment” without their consent.

A lot has been made about the Archie and Ms Grundy “statutory rape” relationship. Yes, this is the CW. And I have no issue with shows depicting all aspects of adolescent life, including the various relationship dynamics between teachers, students, friends, and neighbours. In addition to the romanticization of statutory rape, the problem with the Archie and Ms Grundy relationship is that it serves as nothing but shock value in the actual story itself. Much like the Betty and the Veronica kiss, which was played up so much in the pre-season promos, the steamy car sex scene was also played up for shock value or, at the very least, to make the show look more “edgy.”

What Riverdale seems concerned with is drama for drama’s sake, without it actually serving any sort of purpose in terms of plot or character development. We don’t see how the relationship affects Archie, particularly after they are caught and Ms Grundy is driven out of town (another issue entirely). You’d think this subplot, and it’s long-lasting consequences might be worth picking up as a major storyline of the season, particularly when it seems their meet-up at Sweetwater river is a major piece in the puzzle of Jason Blossom’s murder. Instead, we get Maple Syrup subplots, weird dominatrix kidnapping scenes, and creepy old grandmothers.

Speaking of strange subplots, we had the so-called “feminist” episode where the high school girls band together to fight back against The Patriarchy. Led by Veronica Lodge, the girls coordinate a strange revenge plot against football player Chuck Clayton, who has been passing around a “playbook” of all his sexual conquests. The entire episode is a weak attempt at shutting down slut-shaming at Riverdale High School, capped off with a feel-good “girl power” ending. This, coupled with the fact that Chuck is the only consequential black male character on the show and is, predictably, set up as a hypermasculine, sexually aggressive douche-bro, is another instance of Riverdale making empty gestures at progressivism while, ultimately, reverting to the same tired stereotypes and tropes that plague every other mainstream series that has ever existed.

It is Riverdale’s oft-repeated mantra that “nothing is what it seems.” None of this is truer than in the CW’s own shallow attempts at progressiveness and inclusivity. It remains to be seen if Riverdale will continue to push faux-progressivism into season two, especially after it has become the CW’s new darling series. But it’s hard to envision that frustrating the fanbase is the recipe for success and longevity. (Then again, it’s still working with fandoms like Harry Potter, Supernatural, and Big Brother.)

This is a real shame. Because, in my mind, it seems that high school dramas, especially on the traditionally “teen-centric” CW network, would be the ideal forum to take real chances with topical storylines and explore the complexity of growing up in the 21st century without compromising the murder mystery storyline. So as Jughead transfers to Southside High, let’s hope that other fundamental story elements change. In Riverdale, not every story is as it seems. But there’s a difference between plot twists and outright blindsiding fans. Let’s hope they get it right in season two.