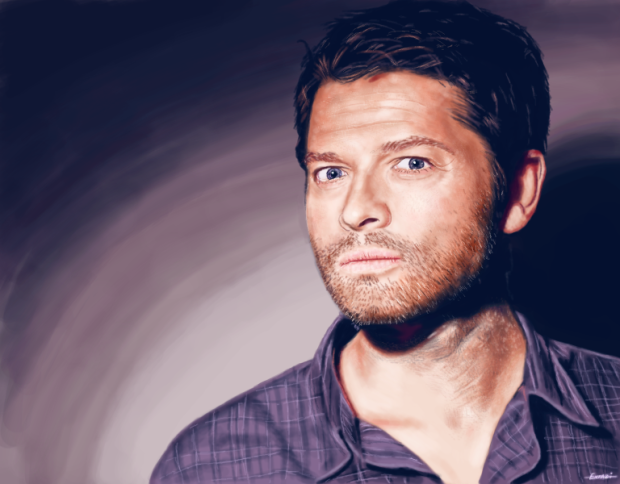 On Friday, March 31st, a Mishapocalypse hit the interwebs after Supernatural star Misha Collins live-streamed his first ever social media marketing lecture at Western Washington University. Misha’s lecture, aptly titled, “How to Conquer the World of Social Media,” was all about how to best amplify your voice on social networking sites like Facebook, Twitter, and Instagram. But his advice on how to conquer the online world can easily extend into “real life.” Here are ten life lessons (and social media tips) we learned from Misha Collins.

Be Yourself
Be honest and authentic. True to form, Misha began his lecture with a slide that boasted, “C-List Actor Joins Twitter in 2009,” poking fun at his original intentions for going online. At first, he used Marilyn Monroe’s highly constructed star persona as inspiration for how to cultivate his own public image. It didn’t work. “It fucking sucked,” says Misha. “It bombed. And it was because I wasn’t being myself. I wasn’t being me.” From that moment forward, Misha strove to be more authentic online, presenting what he calls a “heightened, more playful version” of himself. Since then, he has become a social networking tour de force, sharing his life (stories, poetry, bike rides), interacting with fans, and promoting his charity work.

Really Believe in Your Message
People are really good bullshit detectors. They can smell phoniness and fakery from a mile away. This is why it is so important to truly believe in the cause you are pushing, whether it be a charity, a product, or your political beliefs. Enthusiasm is contagious — when someone is passionate about what they are doing, it automatically draws other people in. And Misha suggests, whenever possible, to focus your efforts on causes that make the world a better place. Amplify your reach by sending messages people will want to share with others. Social media can be a great force for global change. But, as Spider-Man knows, with great power comes great responsibility. Use your platform for good.

Have Good Intentions
Misha warns that if your primary motive for being on social media is “getting things from people,” you are going to fail. In general, people don’t like it when you just ask for things — whether it be money, support, or attention. Donor fatigue exists. Instead, focus on generating valuable content that appeals to people organically. (And being entertaining and humorous while doing so never hurts.) That way, when you do ask for support, people are more willing to give it. Use the 90/10 rule — spend only 10% of your time asking for things. Use the rest to engage with the world around you, create meaningful connections, and have fun.

Be Playful
Speaking of having fun, it’s important to be playful in your community. Develop a common language and joyful culture in your circles so that it feels like a special club. In Misha’s case, using tongue-in-cheek language to describe yourself (“overlord”) and your followers (“minions”) creates a playful environment. Use humour to keep things lighthearted. “Embrace your weirdness,” says Misha with fervour.

Subvert Expectations
George Costanza’s “do the opposite” adage can help keep things interesting. Be familiar with the rules and best practices of the networks you use… and then (occasionally) break them. Subverting expectations can help flip the script and galvanize others to join you. For example, Misha describes how he sometimes uses “clickbait” headlines like “Not Safe For Work…” to link to very wholesome videos of his family. Don’t take things too seriously. People who flout convention are the ones others flock to. Bend the rules.

Swim Against the Stream
Similar to subverting expectations, it’s equally important to stand out in the crowd. Misha cautions against falling too much in line with common social behaviours. On social media, he avoids overused “Twitter parlance” like LOLs and IMHOs and ICYMIs so his content doesn’t get lost in the shuffle. Similarly, he only uses hashtags sparingly, like when he is pointing people to a very specific issue or social cause. Be unique. Create your own language. Start a trend.

Stay Woke
It’s so important to be informed of what’s happening in the world around you, especially outside of your own circles. As much as possible, keep up with technology trends so you’ll always be on the cutting edge. For instance, Facebook is currently trying to popularize their “Facebook Live” streaming service, which means their algorithms are more likely to promote content that uses this technology. Similarly, target your messages to the people and communities who will be the most interested. And remember that people are like monkeys. We love to click on things like surveys, polls, and “Like” buttons.

Congress is putting our internet browser data up 4 sale. I'm not ashamed of my browser history. #ProfitBeforePrivacy https://t.co/bZZ6pyGXMm pic.twitter.com/T8lwHNTSLr

Be Judicious
Quality over quantity is key. Misha doesn’t subscribe to the idea of updating your feeds morning, noon, and night. Posting frequently may get you more retweets in the short term, however your overall reach will diminish because people will stop listening. Being judicious also applies to consuming online content. Be aware of “negativity bias,” the phenomenon where we actively scan for negative feedback and disregard the positive. Step back and allow yourself to take the overall temperature of your surroundings. Be disciplined about ignoring the “haters.” You do not need to respond to everyone. It’s hard, but learn to say “no.”

Don’t Sell Your Soul
The most important advice from Misha’s lecture is to not mistake social media for real life. While it is true that many of us have made meaningful connections and friendships online, it is equally important to seek out experiences in the real world. Don’t let social media become a crutch. Go outside, take a walk, smell the roses. Live your best life and have fun!