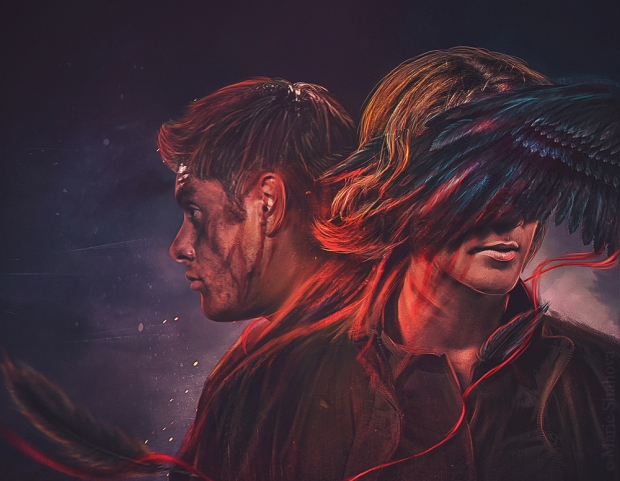 In “The Monster at the End of This Book,” the eighteenth episode of the fourth season of Supernatural, brothers Sam and Dean Winchester stumble upon some slashfic featuring their namesake characters in Carver Edlund’s book series:

This scene marks one of the show’s first meta references to its fan community and, more specifically, those “sick” fans who read and write “Wincest” fanfiction. Wincest, a portmanteau of “Winchester” and “incest,” is the original OTP of the Supernatural fandom: the first Supernatural slash community sn_slash (“for all your brotherly needs”) was created on LiveJournal only a week after the pilot episode aired on September 5th, 2005. In short, fans have been shipping the Winchester brothers since the beginning, with many convinced of (or, at least, interested in) a romantic and sexual bond between the two.

A little context: the Supernatural fandom, more than any other, is marked by its “shipping wars.” In one camp, the Dean/Castiel (“Destiel”) shippers, who believe there is a “more profound bond” between the older Winchester and his guardian angel. In the other camp, the Wincest shippers, who believe the bond between Sam and Dean eclipses all others in the series. Both ships are highly popular within the Supernatural fandom, however, Destiel reigns supreme in fandom at large, consistently topping “fandometric” lists and infographics. In fact, many of the uninitiated begin watching Supernatural because they’ve seen so much Destiel fanworks on Tumblr.

Although there are multishippers out there (hello!), the fact remains that Supernatural fans are heavily divided along shipping lines. This makes for a very, ‘erm, passionate online fandom, where social media posts praising either ship are flooded with responses from vehement detractors. Magnificent discord is the hallmark of the Supernatural fandom. But the most common point of contention? Wincest.

In a highly engaging Reddit post called, “Appeal of Wincest?,” many Sam/Dean shippers took to their keyboards to help defend one of the most taboo and most popular ships in the Supernatural fandom.

First and foremost, there’s an argument to be made that Sam and Dean Winchester share the most profound homosocial bond on television. Few would dispute that the brothers’ onscreen chemistry is unparalleled in contemporary fantasy horror; a chemistry that owes itself, in large part, to the delightful offscreen friendship between actors Jensen Ackles and Jared Padalecki (or “J2”). This intense “bro love” between Sam and Dean can, according to a comment by Reddit-user stophauntingme, lead to some “wires crossing” between platonic and romantic love:

Most wincest shippers generally love gen fics that focus heavily on the brothers as well as far as I know; the show’s gut-wrenching bro love is really something to behold… but as you get more into the dramatics of it all, it can somersault and cross wires and get you into accepting it as a function of romantic love (if you wanted).

[…] [F]or me the show’s heart was, from the very outset, the brotherly love between Sam & Dean and specifically how the sibling roles between ‘big brother’ and ‘little brother’ were a source of comfort to both of them and not burdensome trappings that either of them really wanted to break out of any time soon. I’ve seen the first 3 seasons framed as ‘Dean was young, insecure, and lonely, and given his lack of connection to anyone else more functional, he went to go get Sam in the pilot.’ But I definitely saw it more as Dean wanting Sam back in his life and wanting to be a big brother again. There were a lot of sweet moments (and still are) regarding the two of them as big brother & little brother… some as subtle as Sam speaking so excitedly to Dean that he loses awareness of his surroundings and Dean has to put his arm out to stop him from crossing the street as a car zooms by (one of my faves, lol) to the more obvious instances of Dean gently brushing Sam’s hair back & framing his face in his hands to make sure he’s okay after winning a fight with Gordon.

Moments like those – and Sam and Dean’s sibling roles – come off really endearing considering how mutually affectionate they are to one another in their own ways that seem surprisingly compatible (ying-yanging). For a fan, after awhile of stewing in them, it’s not exactly the most surprising thing that they get rolled up, somersaulted, criss-crossy wires, and bam: you’ve got some potential for wincest.

Sam and Dean’s brotherly affection is the obvious source of many Wincest fics. However, chemistry is not the only reason why fans ship the Winchester boys. Many ship Sam and Dean because it is taboo. After all, fanfiction was never meant to be kosher. The original Kirk/Spock slashfics emerged in direct response to the erasure of queer relationships and sexualities in science fiction. Fanfiction is meant to be subversive, challenging, a revolt against the status quo. Wincest is no different. For many, the Sam/Dean ship is intriguing, new, and exciting: the type of relationship (sibling incest), its participants (the Winchester brothers), and the medium of fanfiction itself exist on the fringe of society. There’s a common thread of illicitness (NSFW) to all three.

Wincest is an escape from the mundane, the tedious, the daily grind of the hunt. It hides in cheap motel rooms of po’dump towns and in the darkened backseat of midnight Impala rides. It’s in how Sam and Dean come to terms (or not) with the clandestine nature of what the fuck they’re doing. This fringe appeal is echoed in a comment by Reddit-user sulphurcocktail:

I can only refer to my little corner of fandom, but most of the Wincesters I know enjoy the illicit aspect of the relationship. They like that it’s taboo, that Sam and Dean are in too deep. Nothing is normalized. And if Sam and Dean try to make it seem normal on the surface (such as lying to people about being brothers), it’s nothing close to normal under that thin veneer.

Think about the (American) Hunter community. It’s Outsider. It’s fringe. It’s absurdly dangerous. If you’re raised in the Hunting life, it’s easy to see how you don’t belong in regular society, how norms stop applying to you. You kill things that look human, sometimes. Maybe you even kill humans, if they’re possessed or infected or bitten or practice black magic. You have your own lexicon. You can’t share your secret with anyone but each other. It’s part warzone, part gang, and always covert. You fear raising children in this world, and your life expectancy is greatly diminished. You depend upon a very small circle for your very life. And if you manage to find some small comfort under these conditions? You grab it and you hang on desperately. No, it isn’t healthy. It’s not supposed to be. It’s bittersweet, dystopian, angsty, delicious devotion. That’s the appeal of Wincest.

All things considered, as a ship, Wincest just makes sense. It doesn’t appear out of nowhere. Maybe, just maybe, Sam/Dean shippers aren’t as “sick” as the Supernatural writers might insinuate. (Unless you own it, you gorgeous freak.) Still, what characterizes most negative reactions to Wincest is many fans’ inability to accept an incestuous relationship: Sam and Dean are brothers and, in our world, brothers having sex is highly taboo, objectionable, abhorrent. But this is fanfiction. Whatever we say, goes. And, if Wincest squicks you out? Keep calm and scroll on. There’s always Destiel on the dash.

FAN/FIC Editor’s Rec: The Last Outpost of All That Is by gekizetsu (Explicit, M/M, Wincest, 59K words) The world begins with the interruption of a sleep. Which is why wakefulness is the only proof of existence. And why the world is fragmented and cannot achieve fullness. And why it constantly seeks to reconstruct fullness. In vain, because the discontinuous will never pass over into the continuous. Mathematics tells us that, last outpost of all that is. — Roberto Calasso, Ka

Mary Sue is competent in many areas, physically attractive, and always gets her man. She is also a multi-user pseudonym for writers who wish to publish anonymously for FAN/FIC Magazine.

28 Comments on The Supernatural Appeal of Wincest