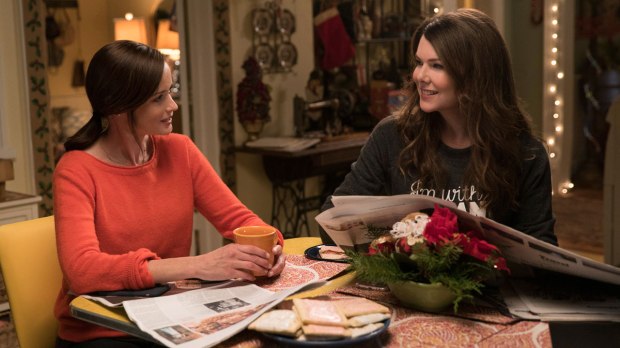 Warning: This article contains spoilers for Gilmore Girls: A Year in the Life. If you haven’t seen it yet, have Jess Mariano rip out your wireless router now.

Winter, spring, summer or fall
All you have to do is call
And I’ll be there
You’ve got a friend.
~ Carole King

We didn’t get the joyful chorus of Carole King’s “Where You Lead,” but we got her four seasons instead. Winter, spring, summer, or fall, all you have to do is call (Rory Gilmore may have a spare cell…) and we’ll be there. Back in Stars Hollow again.

Gilmore Girls: A Year in the Life is the long-awaited Netflix revival that reunites an impressive cast of our favourite characters from the tiny Connecticut town. The four-episode series picks up where Rory, Lorelai, and their Stars Hollow friends left off nine years ago. Life has happened, people have changed, but much has stayed the same. Rory is a flailing “thirty-something,” trying (and failing) to use a one-off piece in The New Yorker to propel her into a long dreamed of career as a journalist. She lives out of boxes across three different states (and one ocean) and struggles to find stable footing. Lorelai and Luke are still together, having fallen into a comfortable, if predictable, domestic routine. They squabble about DVR space (too many Lifetime movies), junk food (“they’re organic!”), and whether or not to have one of Paris Geller’s surrogates carry their hypothetical baby. Emily Gilmore is reeling after the tragic passing of her lifelong husband, Richard, and is purging her life of old possessions and DAR obligations (“they don’t bring me joy”).

This is the focus of A Year in the Life, the three generations of eponymous “Gilmore Girls” as they come to terms with the opening and closing of life’s chapters: for Emily, it’s living without her husband of fifty years; for Lorelai, it’s feeling stuck in the rut of middle-age (just like her old jeep); for Rory, it’s navigating adulthood, where being “special” doesn’t come with a job and an apartment. Each must adapt to these new challenges both on their own – Rory’s novel writing, Lorelai’s Wild hiking trip (book, not movie), and Emily’s move to Nantucket – and with each other – therapy sessions, Friday night dinners, and graveyard arguments. The best part of the show has always been watching the “Gilmore Girls” confront their inevitable mistakes, misjudgements, and missteps. A Year in the Life is no different.

Where the revival is most impressive is in its ability to root the fictional town of Stars Hollow and its characters in a timeless reality. Characters long absent (Babette, Jackson, Doyle, Mrs. Kim) are seamlessly interwoven into the main narrative and the Stars Hollow town canon is wonderfully expanded (Michel’s baby-crazy husband, Mr. Kim, the secret bar Shhh). A Year in the Life succeeds where so many other revivals (ahem, Cursed Child, The Force Awakens, The X-Files) fail: namely, how to capitalize on nostalgia without feeling like fan service. Perhaps this works so well because of the unique writing style of the Gilmore Girls: snappy dialogue and quick transitions allow for multiple story lines to bob and weave through a single episode. Perhaps it works, also, because Stars Hollow already feels intensely familiar – at once otherworldly and intimate. The town is nostalgia in essence. It is home.

Then again, what would a revival be without its criticisms? Overall, I loved A Year in the Life dearly and, in my humble opinion, is near perfect as far as revivals go. However, the season also had some obvious (and easily avoided) shortcomings. Where the show fails is in its occasional misjudgement of which stories are most important to fans. For instance, I imagine the vast majority of viewers would have much rather spent more time with Lane, Zack and “Hep Alien” (hello, Sebastian Bach!) than on a ten minute montage with the loathsome Life and Death Brigade. (Did anyone else cringe during the Wizard of Oz goodbye scene?) Furthermore, although the Stars Hollow Musical is exactly as boring as a musical by Taylor would be, the too-long scene would have been funnier if it had been more “meta.” Picture a scene where flannel-clad Luke is demonized for blockading the installation of the town’s first traffic light. Or a reenactment of the 24-Hour Dance Marathon, complete with an overdramatic rendition of the Rory-Dean-Jess break up. And, of course, Taylor’s slipping in of not-so-subliminal messages about the town’s impending switch from septic to sewer.

The overwhelming positive response to A Year in the Life has fans calling for more episodes in the future, a very real possibility due to the Netflix’s relaxed programming schedule. The call for another season, however, is largely due to the (ambivalent) fan response to the final episode’s jarring ending. During the last nine years, much has been made of the proverbial “last four words.” Gilmore Girls creator Amy Sherman-Pallatino has long hinted that, from the start, she’d had the show’s final scene written. Now we finally know these “last four words:”

This revelation is the last thing we hear before an abrupt cut to black and (finally!) the familiar tune of Carole King’s “Where You Lead.” In one sense, this ending opens the possibility for future seasons of the show. However, are the startling (and predictable?) “last four words” enough to justify another season? I would argue “no.” With both Lorelai and Emily’s narratives so eloquently wrapped up at the end of “Fall,” I have a difficult time imagining Rory’s baby daddy drama and a lovelorn look from Jess (although a lovely moment for Mariano stans) are enough to carry an entire new season. Perhaps, instead, we could all just use our imaginations to finish the story. After all, like the seasons, we’ve come full circle: Rory is now where her mother was all those years ago, facing the daunting prospect of raising a child alone. Logan has become Christopher, the wealthy, indifferent, and absent father. Jess has become Luke, the sensitive old-reliable that will spend years pining after a headstrong Gilmore girl. Like I said, not much changes in Stars Hollow.

All in all, Gilmore Girls: A Year in the Life is an immensely satisfying Ooober ride back to Stars Hollow where, although Luke’s diner now has wifi, things feel familiar, enduring, like an old friend. Even as the seasons change.

For more thoughts on popular films and television, visit our Entertainment Reviews.