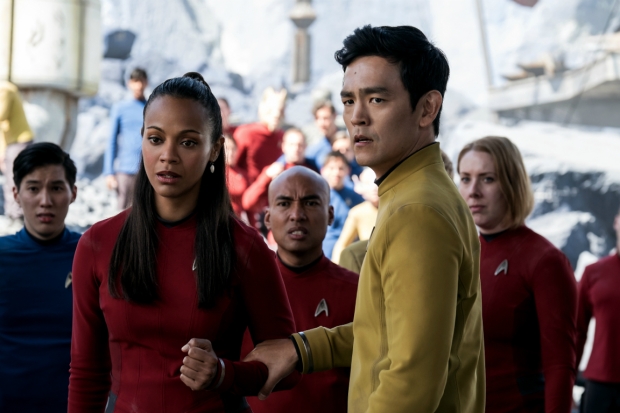 Likely the most common complaint about J.J. Abrams’ two Star Trek films (2009’s eponymous reboot and 2013’s Into Darkness) is that they felt more like Star Wars than Trek – perhaps signifying Abrams was actually auditioning to take the reigns of George Lucas’ beloved space opera franchise. That Abrams went on to direct 2015’s The Force Awakens, spurning this third entry in the reboot series he began, is not irrelevant information, but it begs the question of just how dissimilar these two popular interstellar franchises are. Both utilize typical science fiction tropes – faster-than-light spaceships, diverse alien races, extraterrestrial planets – to tell their otherworldly stories, but the manner in which they tell them is notably different. Star Wars is, and has always been, space opera: closer to fantasy than sci-fi, utilizing larger-than-life characters and themes to create its myths. But Star Trek is hard sci-fi, emphasizing grounded themes and the use of technology in its depiction of a utopian future. Abrams’ two Trek films, despite featuring all the superficial hallmarks of the franchise, felt closer in spirit to the grand mythmaking of Lucas’ series, propping up Kirk, Spock, and the gang as monumental icons. Justin Lin’s Star Trek Beyond is not so simplified.

Taking place two-and-a-half years after Into Darkness, but otherwise ignoring the events of that largely forgettable follow-up (even Alice Eve’s science officer Carol Marcus, who joined the crew at the culmination of the film, is jettisoned without explanation), Beyond sets out into the vast unknown reaches of outer space, at last spurning the creature comforts of our local solar system that had served as the climactic setting in the previous two films. As the film opens, Captain James T. Kirk (Chris Pine) of the U.S.S. Enterprise monologues about his increasing ennui and even boredom in serving as the skipper of an interstellar starship. He’s having trouble finding meaning and purpose in the monotony of day-to-day life and looking forward to an upcoming shore leave at Starbase Yorktown (something of a mammoth snow globe in the middle of space). Instantly, this sets the film apart from its predecessors, which were so focused on the saving-the-world heroics of the crew that it left no time for the little things, i.e. how tedious being in outer space for three years can be. But this was one of the highlights of the original TV series and its many spinoffs: even while the crew was dealing with a new deadly threat, the show still found time to engage with the trivialities and routines of starship life. Beyond, freed from the burdens of epic blockbuster obligations by its director and writers, is allowed to reflect on such things.

Of course, no sooner has the Enterprise arrived at Yorktown than another deadly threat presents itself – this is still a summer blockbuster, after all. A fleeing alien refugee cries wolf and Kirk answers the call, taking his ship through a nearby nebula and into an ambush, leaving the Enterprise destroyed and its crew either dead, captured, or scattered on an uncharted planet. At last, it seems, Kirk’s headstrong philosophy and hero complex has gotten the better of him, stranding him on a remote planet with no Starfleet to save him and no supporting cast to aid him. Enter Jaylah (Sofia Boutella), a scavenger and inhabitant of the planet, who gradually rescues the Enterprise’s crew one by one. Looking like an albino female Darth Maul and acting like Katniss Everdeen without the moping (scriptwriters Simon Pegg & Doug Jung based her portrayal on Jennifer Lawrence’s character in Winter’s Bone), she’s easily the most resourceful character in the film. What’s more, her resilient personality and no-bullshit attitude grants this franchise, at long last, a strong-willed, independent female character not largely defined by her relationships with the male characters (as Uhura [Zoe Saldana] is with both Kirk and Spock [Zachary Quinto]). Just as Star Wars last year finally embraced the power of a female protagonist, so too does Star Trek recognize the value in such a character – now if only she was the lead.

But if Jaylah represents the best that a new character to the Trek universe can offer, then unfortunately antagonist Krall (Idris Elba) is somewhere close to the worst. With Elba’s striking features masked by prosthetic makeup (representing the fourth film of 2016 where his performance is limited to largely verbal) and his sonorous voice altered by an unfortunate accent, the character is a misshapen and ill-advised mix of the previous two Trek villains (Eric Bana’s Nero and Benedict Cumberbatch’s Khan). Blending Nero’s alien rage and vengeance with Khan’s very personal vendetta against Starfleet results in a confusingly motivated baddie, less a fully fleshed-out character than a collection of generic traits. Taciturn, obstinate personality? Check. Psychotic tendencies? Check. Secret and shocking backstory? Check and mate. Though the third-act reveal of Krall’s actual heritage is a clever bit of misdirection, it’s simply not enough to dimensionalize a rather thin and flaky adversary. A shame, to waste an actor of Elba’s stature on such shoddy characterization. 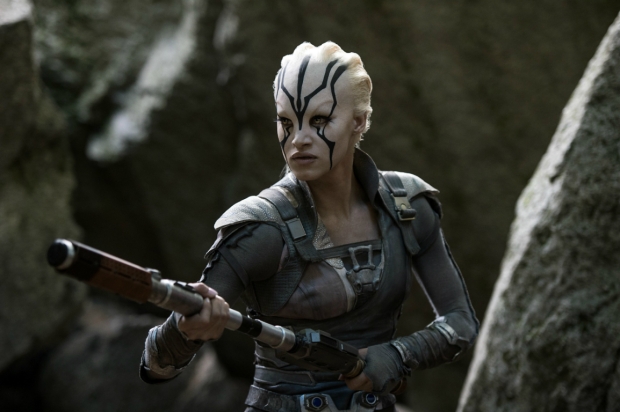 Where the film redeems itself, though, is in its reversion to the themes and structure of the original TV series, celebrating its 50th anniversary this year. Whilst Abrams’ two films were primarily concerned with the mythologization of Kirk (and Spock, to a lesser extent) into an iconic hero, Lin is more democratic, showcasing the crew working together to solve problems and ultimately save the day. In true Trek fashion, an epiphanic realization leads to a climactic solution so brilliant and wonderful that it threatens to overwhelm the rest of the film. To say more would deprive future viewers of a truly cinematic moment, but suffice it to say that this sequence, equal parts callback and homage, captures the very best of what Star Trek can be. Gloriously optimistic and supremely entertaining, it proves that not every modern film franchise needs to be grim and gritty. Some can be fun, too.

FAN/FIC Editor’s Rec: Running with Scissors by mrasaki (Explicit, M/M/M, McSpirk, 11K words) Days like this, Leonard hates being on any planet with Jim Kirk, because Jim has just the sort of dismal luck that likes company.

Daniel has been a movie fan for as long as he can remember, ever since watching the original Superman as a child. He holds two degrees in film studies and works in the film industry, so you could say he's a bit of a cinephile. He lives in Montreal and barely speaks French.

2 Comments on REVIEW: Star Trek Beyond is a Fun and Familiar Homage to the Original Series