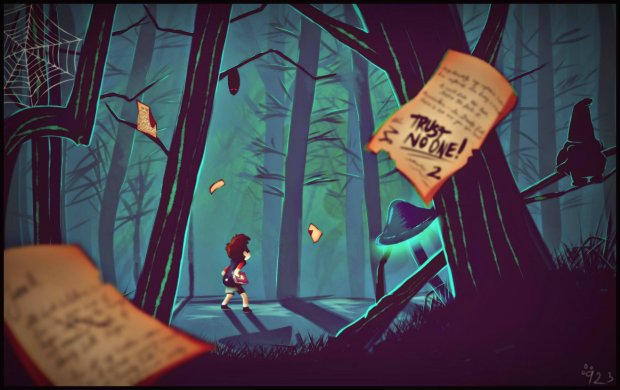 Back in 2014 I stumbled across some gifs on Tumblr that pictured a quirky, humorous cartoon. I had caught up on the shows I had been devoted to watching and my now-husband had about had it with me watching Futurama on repeat to fill the gaps. I shrugged and decided to check the show out, expecting it would at least be good background noise while I wrote or cleaned the house.

Immediately, I was intrigued the show was a Disney Channel Original. The humor I’d seen captured in bursts of flashing images or clips with subtitles did not seem particularly Disney to me. I had actually suspected Nickelodeon: I grew up watching Disney Channel shows back in the ‘90s and remembered them as wholesome, gentle cartoons based on movie arcs.

Alex Hirsch won the hearts of fans, reviewers, and Disney creative executives with his original paranormal cartoon. I fell in love with the bright and lighthearted writing in the first episode, even as I choke-laughed about the tenacity of gnomes. Quick-witted, punchy, and surprisingly dark and twisted, Gravity Falls has left its mark. The story of one last epic summer of childhood before twins Dipper and Mabel Pines turn thirteen is littered with imaginative storytelling and superbly developed characters.

I binge-watched the first season online and quickly found myself awaiting each new episode’s release. I started to wonder how I’d go about cosplaying Wendy, in her infinite teenage badassery, at my local con. My husband even jumped onboard the fandom. We went online to search forums for clues we’d missed in episodes, studied fan theories, and idolized fanart. We debated who, or what, we thought The Author might be. Of course we discussed the show’s villain and, honestly, a terrifying character to reckon with, Bill Cipher.

And it wasn’t soon after that I felt my heart break when I learned the show was coming to what I felt was a premature end. There was still so much potential to be had! I wanted more, more, more. Initially, I rebuked the whole idea of the show being over. There were too many answers I craved still, more information to discover in its universe.

Which is exactly why Alex Hirsch is a beautiful creative genius. From the moment he began his journey with Gravity Falls he knew the show would have a finite span. There was a specific story he wanted to tell in a specific way and he not only made it happen, but managed to convince a huge network to sponsor him in the process.

Mr. Hirsch wrote a Tumblr post explaining his decision. He assured lamenting fans that this was his choice and it was the right one to make. Hirsch had total control over the outcome and ending the show at the end of season two was not only what he wanted, but had been counting on since it began. Questions would be answered (most of them, anyway) and there would be a definite conclusion for fans to relish in.

When the masterfully written finale aired earlier this year, after I had been anxiously waiting for it, I realized Alex Hirsch had done us all a huge favor. Once I’d dried my tears and blew my nose, I reviewed the entirety of Gravity Falls. I suddenly remembered my past favorite shows and how some of them had gone on just a titch too long and had lost themselves in the process. Or shows I had been heavily invested in that got pulled off the air with no warning and left me in a lurch, desperate for some form of closure. Gravity Falls was a rampant success for Disney: it could have easily lived on to see itself become some twisted, nightmarish form of what it once was. As a gamble for the network from the beginning, it could have just as easily been cancelled. However, Mr. Hirsch balanced his creative vision in the sweet spot of both worlds.

He knew exactly what he was doing from the beginning.

Alex Hirsch wrote a critically acclaimed show that fascinated viewers and ended in a way that satisfied most fans. He intentionally didn’t answer every single aching question because, honestly, how boring would that have been for us all? This show was about intrigue and mystery and danger. If it had ended all wrapped up with no loose ends, it would have felt too stiff, ingenuous. This show and its ending changed me as a writer and as a media consumer. It made me more critical of how plot is handled and most importantly:

How to say goodbye.

We fans should appreciate that Gravity Falls lasted only as long as it was meant to. If I could shake Mr. Hirsch’s hand, I would. His ability to draw an adored story to a close is expert. When the time comes, I hope to channel him at the end of my book series. Goodbyes are hard, they are the hardest, but he managed to dull the pain. To have such an utterly poignant and satisfying ending to a show I’d been obsessed with, is next level craftsmanship.

So thank you, Alex Hirsch, for creating Gravity Falls. Thank you for the wondrous and tense moments of growing with loveable characters. But, most importantly, thank you for ending the show while we could still love it for what it was, a short and sweet adventure that reflected the essence of childhood. I can’t wait to see what you do next.

C. L. Foltermann is the holder of a Bachelor’s of Psychology from Old Dominion University and has been crafting fanfiction online since 2009. Currently, she works at a preschool full time and runs CynFol Adventures, a blog about her adventures in Maine.

2 Comments on Teach Them How to Say Goodbye: Why Fans Should Appreciate Gravity Falls’ Short Run